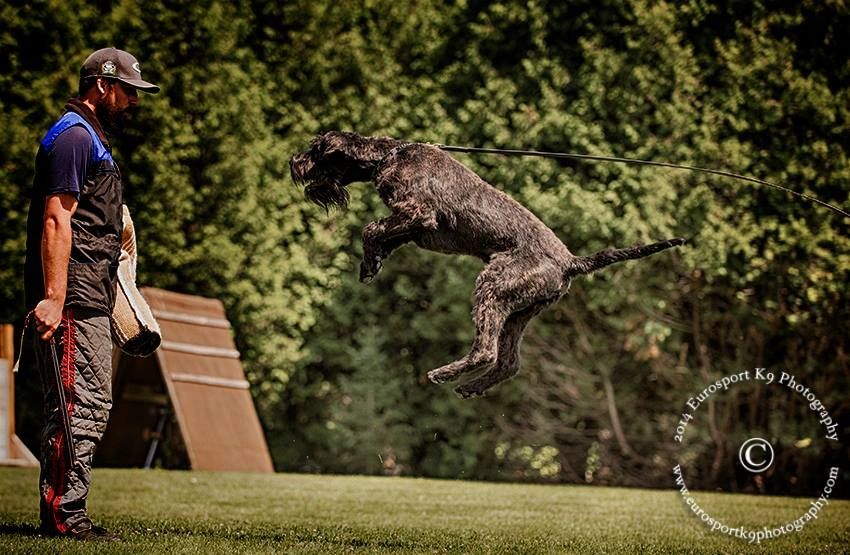 We seek out the best German working bloodlines and import our dogs, as puppies, directly from the German breeder. We raise, train and assess our dogs in the sport of schutzhund (IPO/IGP), and obtain health testing beyond the OFA-CHIC breed recommendations.

Our breeding plans are based on transparency and full disclosure.

In your search for a puppy, consider this...

“Many people come to this list seeking mentoring regarding the purchase of this breed. Many times they are expecting the dog which is a square peg to fit into their round hole. This breed is NOT for everyone and if you damage one of these dogs because you attempt to force it into a job not suited for its genetics you damage the breed for all.

THIS BREED IS NOT SUITED FOR SERVICE DOG WORK! It is suited for MANY jobs. Please read all.

As a farm dog the giant would both protect and move livestock. It is a dog that will defend livestock from an outside threat and will also protect the owner (shepherd) from any attempt from livestock to threaten or attack the person. An intelligent dog that can both protect the stock and the handler. A dog that has been developed to be both obedient to command AND to ignore obedience when a situation arises in which it reads threat. This breed has powerful jaws and knows how to use them. This breed has the prey drive to both take down a predator and punish cattle or stock. It has a calmness in its work when needed and power in its work. You get both sides of the coin with this breed and as such it is not a good candidate for service work where a steady job must be performed and obedience to task is essential.

As a guardian the giant serves well as a sentry on patrol as well as a partner in apprehension. The giant is a working breed and his protection has a large element of aggression and defense. This is not a prey only breed. For the giant protection work is serious work. If fully engaged in fight the giant is powerful and many as a breed do not have "friends" outside of their pack. Giants bond very tightly to an owner and are not thrilled to be handled by many outsiders and extensive work when young to teach grooming and handling for vet care must be established. Giants have excelled in Schutzhund work over the years showing the balance in their temperament and that indeed they are a working dog capable of much power. In regards to service work this can lead to a dog becoming almost hyper attached to a handler and therefore a dangerous dog if it perceives that someone trying to help someone with a disability is a threat. This is a very powerful breed that you cannot lose control of. Remember they are obedient to command but also have been bred to be independent thinking dogs and will react.

The giant is a dog that once socially mature does not want other dogs in its space. That friendly puppy at 8 weeks will grow up into a working dog A dog that closes its social circle as it grows up. Many giants can have issues even within a household and be bonded to one person. Again see the problem with service dogs? This is with both people and other dogs. For the giant its personal space and the personal space of its owner is like a religion to it, and if you mess with it you do not want to meet that challenge.

The giant BARKS, This is a loud breed with a powerful bark. Again a service dog is a quiet animal that when working in public should not be noticed.

The giant is a dominant dog and needs constant monitoring to prevent marking in public. Again a service dogs cannot soil public spaces.

This breed is suited for strong individuals with structure and a love for training and activity. This breed excels at many dog sports as it loves to use it brain and makes an excellent search and rescue dog where its intelligence solves problems on a daily basis. This is not a breed that thrives on the mostly sedentary and low drive work of a service dog. This dog seeks and thrives action and hard physical action.

This breed will smash into you, knock you down, bruise you, and challenge your authority from adolescence forward.

This is a beautiful animal and please respect its genetics and its purpose bred history!!! There are many dogs suited for service, please choose your dog based on its function.

Do not allow breeders who are nothing more than profit enterprises to convince you otherwise. The breed is purpose bred. RESPECT IT”

7 year old Panzer is a happy, intelligent, strong, loyal, and loving dog. Courageous, with astonishing discernment. He is a thrill to own and train.

New additions to our kennel

A loving and loyal girl, training in both Agility and Schutzhund

We are located in rural Ottawa, Ontario, Canada.

We train our Giant Schnauzers in the sport of schutzhund (IGP), scent detection, and agility.

Carleton County Hundesport is the name of our IGP training group; individuals are members of the Ferghus & Company training facility.

Wasserlauf Kennel is a member of the Canadian Kennel Club, registered kennel name "Wasserlauf"; breeding kennel licenced by the City of Ottawa.